One of the most celebrated trilogies in film history sprang from the heart of Marcel Pagnol (1895-1974), the playwright, novelist and filmmaker who became a national treasure in his native France. Unfolding over years about the same unforgettable characters living around the waterfront of Marseille, his epic love story is a bittersweet saga brimming with warmth, generosity and humor.

Pagnol wrote the individual plays Marius and Fanny about the people and patois he knew well, and at the dawn of sound movies, he resolved to transpose them to film. He oversaw different directors for the two adaptations, and by the time he wrote César directly for the screen, he set about directing it himself. Rich in dialogue and saturated in piquant Provençal flavor and real locations, the movies are simultaneously the heights of theatricality and of screen realism, brought to life by a dream cast.

In 1946 Pagnol became the first filmmaker elected to the Académie français. Postwar Italian filmmakers saw in his work the germs of neorealism, and the young filmmakers of the French New Wave also regarded him as an influence. The films also have a history with our very own Berkeley, where they have long been staples at the Pacific Film Archive and inspired Alice Waters to name her restaurant Chez Panisse, after one of the films’ major characters. The Rafael is presenting the versions that have been extensively restored by Janus Films.

The films in the Marseille Trilogy were produced and released in different years. While they ultimately tell a single story, each film has an independent dramatic arc. 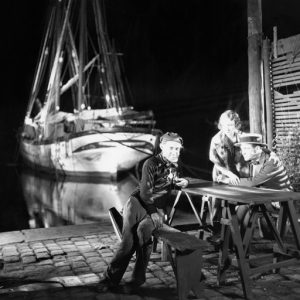 Everyone assumes that young Marius (Pierre Fresney) and Fanny (Orane Demazis) will marry, but Marius can’t overcome his urge to hop a merchant ship and sail the open sea. His father César (Raimu), who owns a saloon on the Marseille waterfront, is oblivious to his son’s dilemma, but Fanny fears the worst. Meanwhile Honoré Panisse (Fernand Charpin), an older, wealthy sail-maker, proceeds to court a reluctant Fanny. In French with English subtitles. Writer: Marcel Pagnol. Director: Alexander Korda. (France 1931) 127 min. Picking up moments after the end of Marius, this second film in the Marseille Trilogy follows Fanny’s grief after the departure of her true love. Circumstances force her to accept the proposal of aging widower Honoré Panisse, which puts saloon owner César at odds with his old card-playing associate, because everyone knows that Marius will one day return. In French with English subtitles. With Raimu, Orane Demazis, Fernand Charpin, Pierre Fresney. Writer: Marcel Pagnol. Director: Marc Allégret. (France 1932) 127 min. Written directly for the screen (and later adapted for the stage, the final film in the Marseille Trilogy takes us 20 years later. Honoré Panisse is on his deathbed, and Marius lives in the shadow of a misspent life. Fanny’s son Césariot, who had been sent away to a military academy, returns and sets out to discover the secret of his identity. In French with English subtitles. With Raimu, Orane Demazis, Pierre Fresney, Fernand Charpin. Writer/Director: Marcel Pagnol. (France 1936) 142 min.